Archive of the month: Audit Feast

Rents received from estates and property have formed a major part of the College’s income since its foundation.

As it is now, this income, along with other financial transactions, was audited each financial year. As College income and expenditure was extensive, auditing was a lengthy process and would involve collating financial information recorded in various ledgers kept through out the year by individuals within the College including the Steward, the Butler and the Master. Bills and receipts submitted by those providing goods and services to the College were also included in the auditing process.

In turn, this information would be transposed and written into what were known as ‘Audit Books’, which contained a summary of the financial transactions conducted by the College, providing an easy to reference guide to annual accounts. 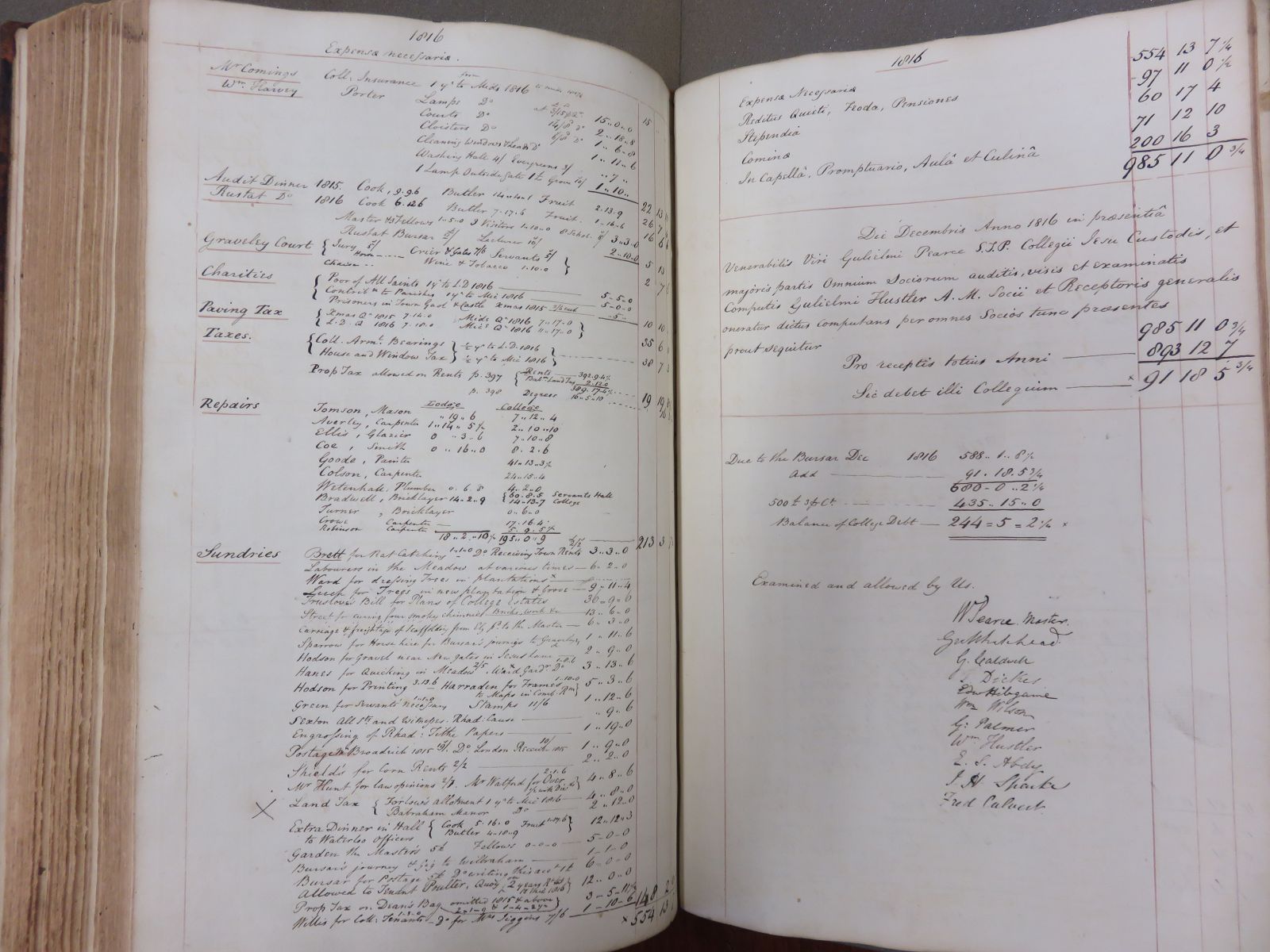 After such a lengthy and complicated process, a celebratory ‘Audit Feast’ was held to mark the end of the Audit, this feast taking place at the beginning of December each year, a tradition still marked today. As the College community often left before Christmas, historically the Audit Feast was also a chance for members of the College to gather before the festive season. It is certainly suggested that the Hall was decorated for Christmas with various historic Porter’s bills recording payments for ‘greens for the Hall’.

The Audit Feasts were no mean affair and taking the receipts and invoices for the 1815 feast as an example, they illustrate the typical choice of food on offer for the period. The first of four separate receipts relating to the 1815 feast came from John Willis, the College Cook, and included many appetising dishes such as ‘roast fowls’, ‘Italian cheese’, apple pie, custards and jelly and some suitably festive mince pies. However, less appealing to a modern consumer, perhaps, were roast udder, stewed eels and pig’s face. The total cost of Willis’ contribution to the 1815 Audit Feast was £11 5s 6d.

Noticably from Willis’ bill and similar historic Audit dinner bills is the appearance of jelly, alongside both sweet and savoury dishes. These jellies would have taken on elaborate and decorative forms and by the mid 19th century would most likely have been made and set in jelly moulds such as these copper examples made for the College by the company Benham and Froud. 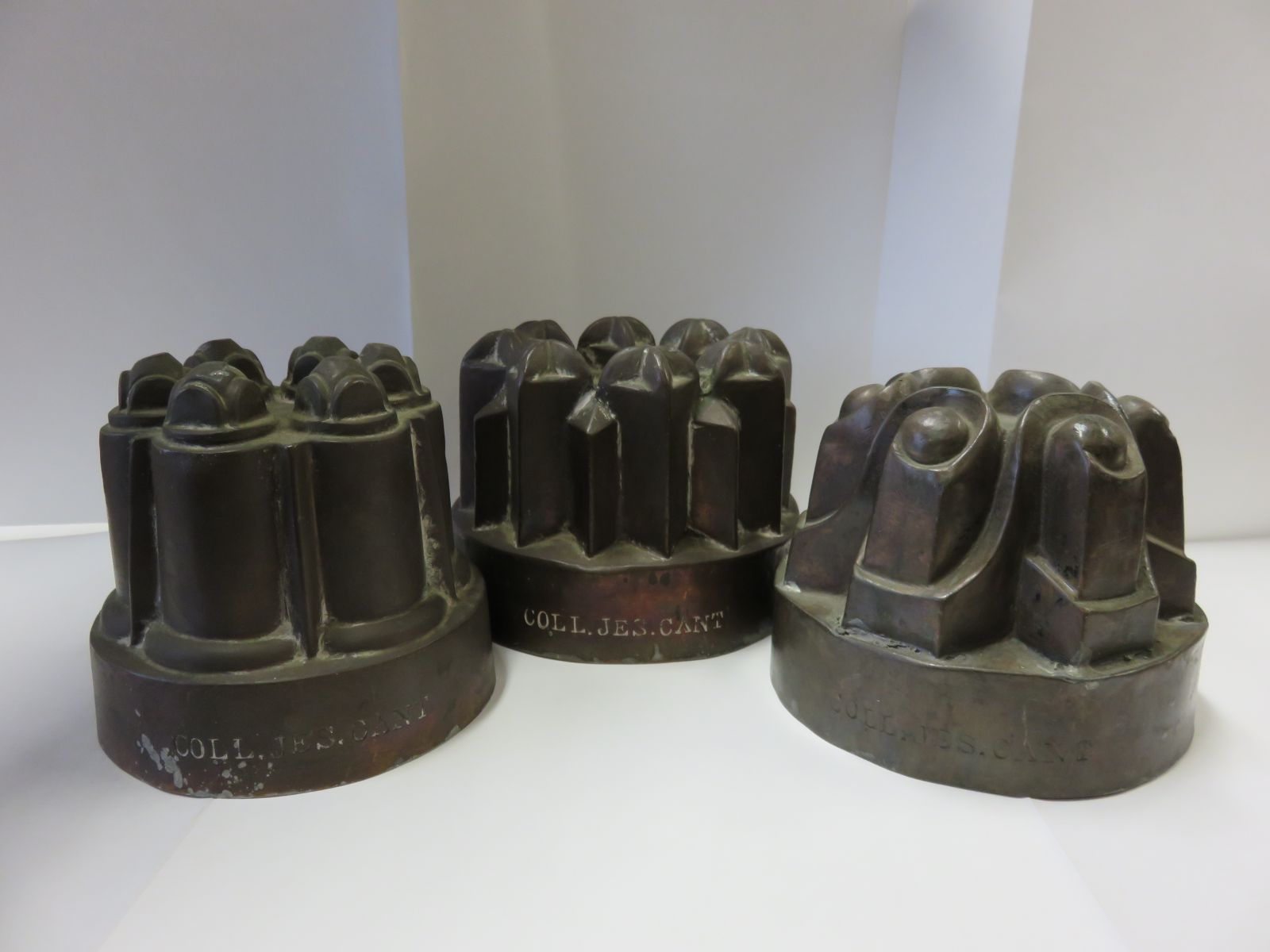 Benham and Froud were a popular manufacturer of copper kitchenware in the 19th century and their predecessor company, run by Richard and Edward Kepp, was responsible for making the orb on top of St. Paul's cathedral. 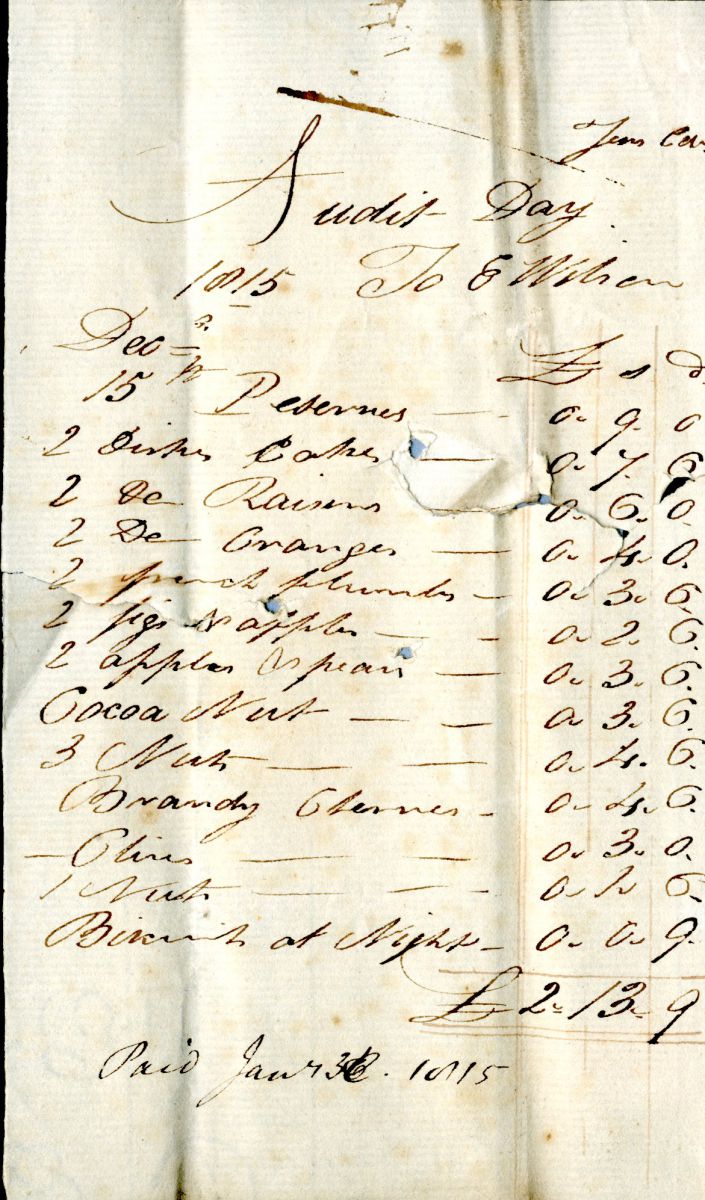 The College Butler at the time, Richard Brett, was responsible for sourcing various other items, being paid £14 4s 1d for both the ‘Audit dinner’ and ‘Audit supper’. The dinner costs included expenses for bread, butter, cheese, Audit Ale, mild ale, 10 bottles of sherry, 14 bottles of port, tea and coffee for 16 people, two packs of cards, candles and the cost of employing a scullion and a laundress, presumably to undertake extra cleaning on top of their usual duties.

The supper included similar items, but in addition payments were also made to Brett for sourcing small (a type of weak beer), 'biskets', 'suggur' and milk punch, that being a mix of milk with various spirits, spices and fruit.

Further drinks were provided by John Challice to the College and although it is not yet known his exact relation to the College in 1815, he eventually became the Butler at Pembroke. Challice provided Holland, brandy and port, Holland most likely being a reference to Jenever, a traditional Juniper flavoured spirit from the Netherlands from which English gin evolved.

The Audit Ale mentioned in the receipts from Richard Brett refers to the potent ales that have traditionally been served at Audit Feasts in Cambridge Colleges since the mid fourteenth century. Usually served in richly embossed silver urns or ‘loving cups’, the ale was often reserved for High Table and the Master’s guests, who would stand whilst drinking.

Audit Ale was traditionally brewed as a strong 'October ale', so called because October was considered by most brewers to be the best brewing month due to optimum weather conditions and the availability of fresh malt.  With this strong ale it was usual to drink two-thirds from the cask and bottle the remainder. The bottles would then be left to stand for another year. This year, for the first time in possibly centuries, the Audit Ale was made on site, in the new West Court brewery. 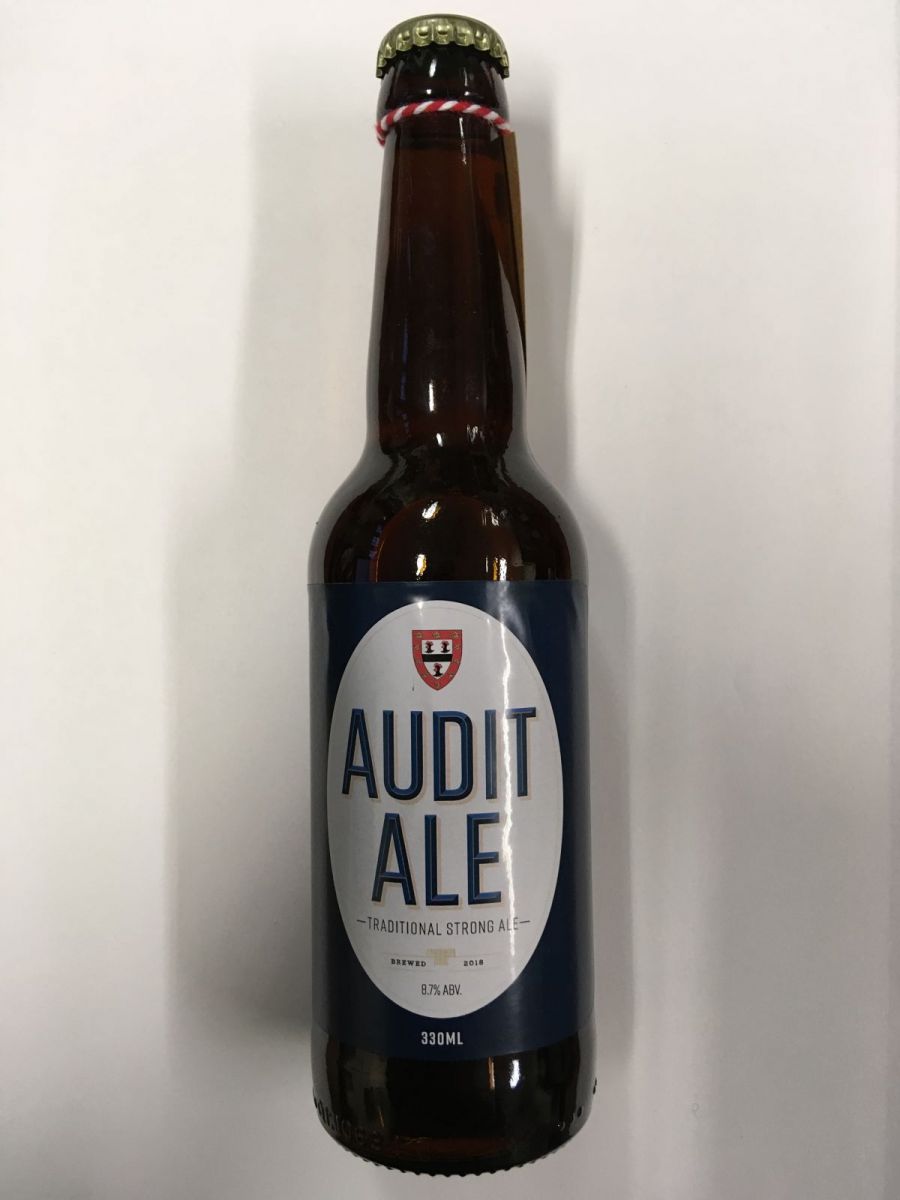