Findings include an undiscovered cloister and deposits that archaeologists believe will give economic evidence of the way of life at the nunnery that preceded the College.

Excavations are taking place on the northern side of Jesus College’s Hall, in an area known as Pump Court. Cotswold Archaeology with the Cambridge Archaeological Unit (CAU) have been excavating the site ahead of work to extend and modernise the kitchen block.

Jesus College began life in the 12th century as a nunnery dedicated to St. Radegund and St. Mary. In 1496, the nunnery was dissolved and its site repurposed as a College for the University of Cambridge. The centre of the College retains the basic layout of the medieval nunnery, including the cloistered court and the conventual church (now the College chapel).

Archaeologists have uncovered earlier features that appear to be the wall and floor of a medieval cloister. The most extraordinary of these is the stub of a large wall, running parallel to the College’s Hall, which replaced the refectory hall of the nunnery. The stub may be the remains of a covered walkway on the edge of a yard space, such as a pentice or cloister, with an open or arcaded side facing across to the nunnery hall. The floor, made of mortar and clay, may have supported a surface of glazed floor tiles or timber planks.

"This discovery is extremely important in our understanding of the history of the site." - Robert Athol, College Archivist.

Robert Athol, Jesus College’s Archivist, said: “The foundations are a real find. There's next to nothing surviving in the Archives that tells us about the site when occupied by the nuns, and there's roughly a fifty-year gap in the early records of the College's history, so this discovery is extremely important in our understanding of the history of the site.”

Preston Boyles of Cotswold Archaeology explained: “We have what appears to be a floor surface packed in some sort of cloister arrangement. We believe this belongs to the nunnery phase of the site’s history, and represents a previously unknown architectural element. This is a unique opportunity to study the remains of two successive, self-contained and near-single-gender communities… which both occupied the same location.”

CAU's director Christopher Evans said: “We’re going to get firm economic evidence of the way of life at the nunnery and that’s a fantastic opportunity. This has proved to be an absolutely extraordinary site. It is basically a matter of gender succession – an all-female community superseded by an all-male community. It is very difficult to think of how many situations that would happen in.

“It’s always been presumed that the College fossilised the plan of the nunnery… [but] there’s a whole new cloister of the nunnery that we’re unearthing. Occupational remains from the College and the nunnery will help us to compare the quality of their respective diets (what they ate and the health of their animals) and the quality of their tableware. Hopefully, we'll also be able to do isotopic study on livestock bones to establish where they were bringing animals in from, and so how far afield their respective economic reaches were.”

The site has produced kitchen and domestic waste, as well as layers of building rubble including bricks, glazed floor tiles and ceramic and stone roof tiles. Medieval stonework including pieces of windows, doorways, and columns, also appears in later layers. It has been recycled as rubble in the foundations of some early College buildings, and used to cap several of the numerous 16th–19th century culverts crossing the site.

Archaeologists have also unearthed window glass and cames (strips of lead that hold pieces of glass together in a window). Some cames were twisted into bundles, apparently after having been stripped from a window. This debris is evidence of centuries of renovation, demolition and re-roofing work at the nunnery and College.

Also uncovered were remains of walls and cellars belonging to a series of small buildings, including coal stores, a shoe place, a cinder place, a stable and a sedge store. These were in existence from at least the late 17th century until they were demolished and replaced by an extension to the college in 1822. More foundations have been found which belong to a hall designed in 1876 by Alfred Waterhouse, architect of the Natural History Museum in London. The hall, which was demolished in the 1960s, incorporated the remains of a much earlier well. A pump appears to have been associated with the well, which is perhaps the origin of Pump Court's name.

Nearby post-medieval garden soils and 17th-century kitchen waste dumps may provide a window into the eating, smoking, and socialising habits of the College’s inhabitants during that period. These domestic waste sites contain animal bones, oyster shells, and clay tobacco pipes. They also produced finds including 16th-17th century Bellarmine jugs, known for the distinctive bearded face on the neck of the vessel. The team also found several jettons – counting aids used from the medieval period to the 16th century – which were often repurposed as gaming counters or gambling chips in card games.

These layers of the College’s history corroborate documentary evidence from the College Archive. “It’s fascinating to see the last surviving remnants of some of the buildings mentioned in the historic record of the College,” said Athol. 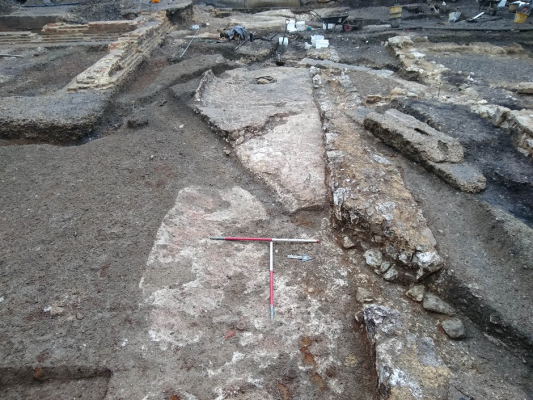 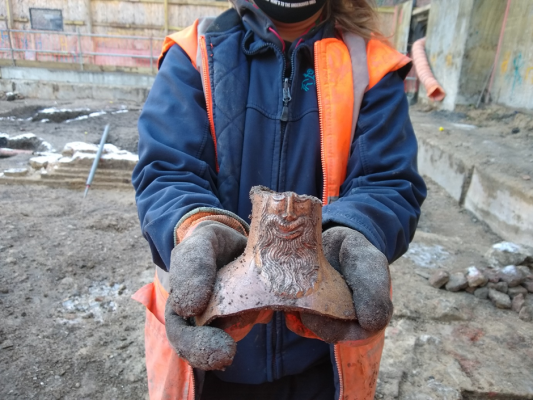 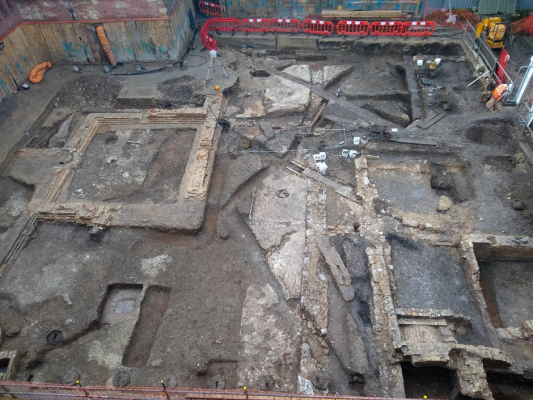