Arthur McLaughlin came up in 1913, so his College career was a short one. 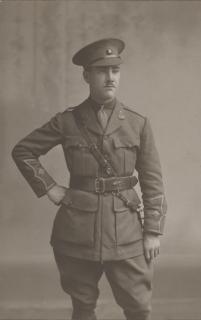 A bright and genial personality

While he was here he showed promise as a rugby forward and rowed at No.3 in the College second boat in the Lent races, weighing in at 11 stone 1½lbs.

His College obituary describes him as a somewhat retiring but most cheerful young man and comments that he had already formed a circle of close friends (Jesus College Society Annual Report ,1915).

This bears out comments from his school who described him as a “bright and genial” personality. They paint a picture of a pleasant and conscientious young man who once he established himself would be an asset anywhere. His commanding officer described him as “one of the most reliable officers I had” (British Roll of Honour).

The British Roll of Honour describes how he died doing his duty in awful circumstances, shot as he was advancing over the top of the trench and falling into a water-filled trench. The writer assured readers that “he must have died immediately”.

In July 1915 his father wrote: “I waited until I would get a copy of Arthur’s photo in khaki and am sending it by the same post”. He goes on to thank the Master for his kind words which had brought such comfort to him and his wife.

As the British Roll of Honour quotes the Master’s words it seems good to use them to end this commemoration of Arthur, who was only 20 years of age.

“He had so won the hearts of Jesus men that there will be but one feeling of grief among them, here or among our soldiers at the front, for his untimely end.

His short career here will not be forgotten, and when the peace returns I do not doubt that in some permanent form his valour and devotion will be recorded here for after times, with others of his brave companions in arms who have passed away.”