Arthur Capel Morris came up to Jesus College in 1912 after being educated privately and then at Repton School, Derbyshire. 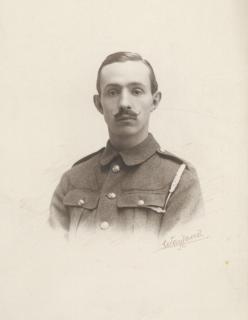 Although there is an obituary for Morris and we have a photograph of him sent to the Master in 1917, we have very little other information about him.

The obituary in the Jesus College Cambridge Society Annual Report, 1916 records that he undertook the Law Tripos with a view to becoming a barrister and was keen on association football and hockey. He did not make the college first team in either sport.

His obituary also tells us that at the outbreak of war he enlisted as a trooper in the 12th Lancers before being transferred to the Royal Munsters as a private. He was killed at Gallipoli after being forced out of his flooded trench.

On the reverse of the photograph Arthur Gray, Master 1912-1940, has written that Morris chose the following text which was to be inscribed on a tablet in a church in Capel-le-Ferne.

“Greater love hath no man than this that a man lay down his life for his friends.”